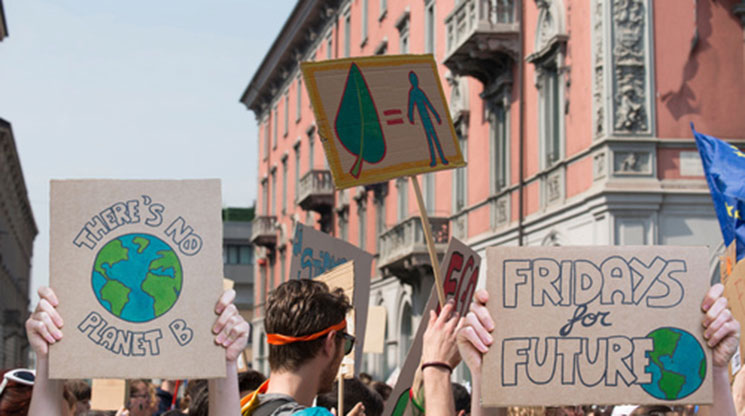 On August 20, 2018 Greta Thunberg skipped school and began protesting by herself outside of Sweden’s Parliament. She referred to it as a “school-strike” while she demanded that the adults around her do more in the face of the climate change crisis.

“I handed out flyers with a long list of facts about the climate crisis and explanations on why I was striking,” said Thunberg. Not long after that, her protests began to spread and so did her message.

Now just one year later, there are school strikes happening around the world thanks to her movement, “Fridays for Future”. Furthermore, Thunberg is taking a sabbatical from school for the year to focus on her climate activism; a move that has already played a significant role in spreading her message worldwide. In fact, she recently met Pope Francis, spoke at the UN Climate Conference in Poland and was nominated for the Nobel Peace Prize. This past September, she made a powerful plea when speaking at the United Nations Climate and Action Summit in New York City. Her words were a poignant demonstration of the severity of the current climate crisis.

Prior to her speech, Thunberg made another powerful impact by choosing to sail across the Atlantic to New York City as opposed to commercial jets which contribute significantly to greenhouse gas emissions. She completed the journey aboard the Malizia II, which uses solar panels and hydro-generators to power the boat. The move sparked worldwide attention, with many hailing the young activist for her undeniable bravery. Another contributing factor to her success has been her use of social media. Providing the public with photos of her two week journey, she gave the world an inside look at waves crashing aboard the yacht, something that not once derailed her determination.

What truly sets Thunberg apart is her ability to make the complex and daunting topic of climate change sound simple. She credits this talent to her autism, calling it a gift since she now can see the issues of the world more clearly. The young activist has never shied away from discussing her diagnosis, as she believes they are a major reason she has been able to contribute so much to the cause. “I was diagnosed with Asperger’s Syndrome, OCD, and Selective Mutism – that basically means I only speak when I think it’s necessary. Now is one of those moments.”

Thunberg’s movement “Fridays For Future” based off of her initial school strikes have become an international phenomenon, most recently occurring in every country across the globe. As for what will come next, one thing is for certain: Greta Thunberg won’t give up until she has saved the world.